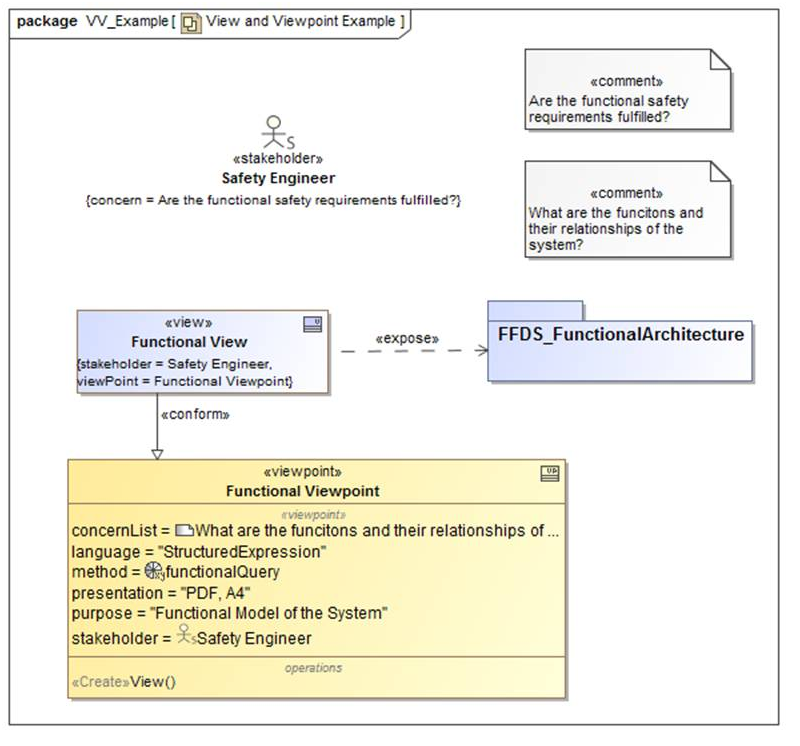 The third part of the blogpost series about the changes in SysML 1.4 presents the updated concept of view and viewpoints. View and Viewpoint are model elements of SysML since the very first public version 1.0. As you may know SysML was developed based on a request for proposal with a set of requirements. One requirement was about views: In SysML 1.0 the view and viewpoint concept is consistent with the IEEE 1471 standard (IEEE Recommended Practice for Architectural Description of Software-Intensive Systems) – now the ISO-42010 standard.

The viewpoint specifies rules for constructing a view including a set of stakeholders, their concerns and the purpose to address the concerns. The view is a representation of the system from the perspective of a viewpoint. The following figure shows a simple view and viewpoint example with SysML < Version 1.4:

In theory that was a good concept. However I’ve never seen a valuable implementation in practice. You need a tool that generates the real view, i.e. the text document, spreadsheet, etc.. But no such tool was available. All SysML modeling tools have their own way how to generate documents from the model. Without the implementation the modeling of views and viewpoints was not very useful.

SysML 1.4 has an updated concept of view and viewpoints. It is still consistent with ISO-42010 and has a more formalized concept how to generate a view. However the final implementation of the view generation is still out of scope of the SysML specification. The following figure shows a view/viewpoint scenario with the all model elements. Now the SysML model element view extends the UML class. Before version 1.4 it was a special UML package. The view has two derived properties: a list of stakeholders derived from the stakeholders list from the viewpoint and the related viewpoint derived from the conform relationship that relates a view to a viewpoint. Conform extends the UML generalization relationship. That means a view is a special kind of a viewpoint and inherits all the features of the viewpoint. The view represents the physical artifacts of the view for example a text document, spread sheet or slide presentation.

The version 1.4. viewpoint has some updated properties according to version 1.4:

A viewpoint must have a View() operation with applied stereotype Create. The method of the operation is a list of behaviors. For instance it could be a opaque behavior that specifies the creation of the view in a modeling tool specific language.

The expose relationship relates a view to model elements that are passed to the View() constructor when it is invoked. The model elements are the entry point for the model query that is typically part of the View() implementation to query data from the model for the view.

Finally I show you a simple example how to use the new view/viewpoint in a modeling tool. For instance the Cameo Systems Modeler from NoMagic provides a report generator based on the SysML 1.4 view/viewpoint concept. The tool provides some predefined implementations for the View() operation of the viewpoint. The following model specifies a view with a short textual introduction and a list of the content of the FFDS model.

The preview shows the text and a table of content of the FFDS model with the name and the documentation of the packages on the next level. These are very basic views and viewpoints. With them you can create your own toolbox of predefined viewpoints and create complex views/viewpoints by combining them.